MARCO BIGI
musician · composer · arranger
about
live music
productions
music class
contacts
It comes a time when, having listened to lots of music, one picks up the chosen instrument and looks for a teacher capable of satisfying the desires of the aspiring musician: a maestro who is able to lead him with the right kind of empathy on the tortuous path that will lead him to be a musician fully capable of freely expressing himself.
In the end what everyone wants is to reach that level of ease which, with a bit of envy, is noted in those who know how to play.
Many things should be learned: from technique to musical grammar, not underestimating the art of listening, which is the fundamental element that should be acquired.
Just like the painter should know the art of seeing before he even squeezes paint on his palette, the musician must learn to "open the ears". Everything starts from here.
There are many methods of teaching music around, and many of them are pedant and boring. How many aspiring students can't stand them and bail halfway through?
I don't pretend to be a perfect teacher, but having I met too many boring professors who transmitted to me more of the frustration of being a musician than of the joy of playing, I elaborated a method that resembles more the work of the nurturer than the one of the gaoler.
In this age everyone is promising easy, fast music courses which in a few lessons will transform you in a star. They're not true. Neither mastering an instrument nor being able of expressing something interesting can be done over a short time.
Studying music primes a physical and chemical transformation in our body and in our mind, and the results begin to appear right after the second or third moment of disheartenment.
We have fingers which have to work in a way up to this time unknown, we must learn how to breathe (and not only those who play wind instruments).
We have ears which have incredible potentiality of focusing upon listening, but they're not used to it. They rather hear music as a ready sealed package whose undertones remain mysterious.
music class
contacts
about
live music
productions
© Marco Bigi - 2017
I teach privately Classic and Jazz Piano, Modern Guitar, Electric Bass, Classic and Jazz Side-blown Flute, Music Theory and Jazz Harmony to individuals or small groups.
a few words on my method of teaching
Everything that's told regarding innate talent, that one might be born with or without a keen ear and that few are given the gift of music, always made me think. I believe the important thing to be the atmosphere in which kids are raised, maybe even from their mother's womb.
Yet we're not searching for the next Mozart. If you're interested, it means you have a feel for it, otherwise you wouldn't have read all the way unto here.
I put at disposal all my musical history. I have had many love stories, in chronological order: guitar, trumpet, piano, bass and flute. For each of them I sought and found who might help me to improve my knowledge of the instrument, but I'm never forgetting that my best teachers were the LPs, which I plowed infinite times to grasp the secrets of the ones who unchained my passion for music.
Among the many teachers I met at a young age, I remember an old classical guitar professor: grouchy, grim and severe. There was no trace of benevolence in him, and the shy seven year old that was me resisted for a while, until he found a twenty year old neighbor, a boy who loved Beatles and Rolling Stones, who welcomed me, impressed by my will of learning, and made me love the guitar as much as the old professor had risked to make me hate it.
Just like a kid learns to talk before than he learns to read, I'm sure that the first thing to do is to have fun with the instrument, discovering its powers, learning how to play simple tunes from the start. At a certain point it will be the student the one who asks the teacher to teach him the music grammar, and the "bête noire" feel will dissolve: reading a score is as difficult as reading a newspaper, but unfortunately at school they only teach how to read words and not musical notes.
I also sing, but I'm not proposing myself as a vocal coach because I have never taken on a didactic path on this delicate matter. I've sung in several choirs and realized that it is important to always sing the score you're reading, instead of just murmuring the names of the notes. Each person telling me, "I don't sing because I can't" doesn't know that not being able to sing is like taking up a bow for the first time and not hitting the target with the arrow. If one learns to hear beforehand, and then to "hit" the notes with the voice, he practices his aiming, and is not out of tune anymore.
Often being marked as unmusical during childhood by sadistic "music experts" contributes to the resignation of a lifetime.

One of the goals that I am determined to make you cross, If you will be my student, is to succeed in making you play instantly what's crossing your mind, your inner singing, in other words, to improvise. Another is the one, when you will be ready, to stimulate your songwriting, because there's never been such need of creativity as there is in this age of cover bands.
All this will obviously happen after you will have learned how to read and to interpret the scores you will care to learn.
There will also be some exercises to unbind the fingers, but why making them boring and repetitive when we can catch two birds with one stone, elaborating combinations that are also pleasant to hear?

All the rest I'll tell you if you'll contact me. 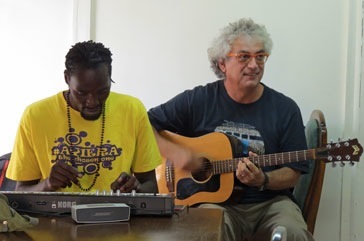 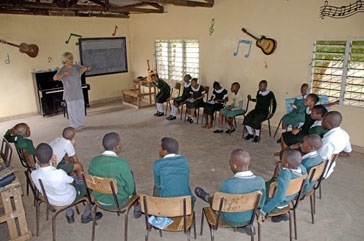